Published by Peter Collins on February 27, 2010

ABOVE: The construction camp which spilled across Diggers’ Drive and a huge swathe of Kalinga Park for months. This image was captured towards the East-West Arterial intersection end of the future Airport Link on 31 August 2009. © 2009 Peter Collins.

That said, you will find in the following pages a handy introduction to the background, heritage and prospective challenges facing Diggers’ Drive, located in the magnificent tree-lined and very popular Kalinga Park, in Brisbane’s northern suburbs.

We appreciate and welcome any constructive feedback and if you have news that the local Kalinga community should be made aware of, please contact us.

Please bookmark this site and let your friends and relatives know the URL…it’s not too late to join the fight to ensure Diggers’ Drive does not become history! ABOVE: Artist’s impression of the entrance to the Toombul (Digger’s Drive) end of Airport Link. Schulz Canal is off to the right and the present alignment of Sandgate Road is in the middle distance. What remains of Diggers’ Drive is at top right. All the picture-perfect hoop pines indicated will ever be a faint echo of the fully-grown ones ripped out during construction. ABOVE: So just how much water can Kedron Brook send down to Toombul? On May 21, 2009 this was what the eastern – the future tunnel-mouth end of Airport Link – looked like.

ON Monday, May 19, 2008 – almost two years to the day this website made its debut – the fate of Diggers’ Drive was sealed when the Queensland State Premier, Anna Bligh, declared Airport Link a done deal.
A contractor is now chewing up the ground to bring to fruition the billion-dollar Airport Link project and the associated Inner Northern Busway behemoth which, over the next four or so years, will be rammed and bored through the suburbs of Windsor, Albion, Lutwyche, Wooloowin, Kalinga, Eagle Junction, Clayfield and Wavell Heights before terminating in a massive intersection-cum-tunnel mouth at Sandgate Road, Toombul – carving a swathe through the most poignant part of Diggers’ Drive, located in Kalinga Park near Clayfield.

ABOVE: Passengers looking out the window on the Airtrain saw this view of the flood-swollen Schulz Canal on May 21, 2009. The stacks of demountable offices of the BrisConnections workforce can be seen on the left bank of what used to be the lower carpark of Toombul Centro.

The initial vestiges of this paraphernalia are assaulting the eastern approaches to Kalinga Park (adjacent to Sandgate Road) after obliterating a large swathe of Diggers’ Drive.

The rest of Kalinga Park has been converted into a sprawling construction camp with Airport Link using its once green and pleasant fields as a staff car park, operating 24 hours a day, seven days a week.

ABOVE: An Airport Link runs through it…an artist’s impression of the grand tunnel mouth in Kalinga Park. Behind the fictitious big pine (oddly there used to be a grove of mature hoop pines in this very spot) is the multi-storey exhaust stack needed by the tunnels.

The social, cultural, historical and environmental values both Diggers’ Drive and Kalinga Park embody have been clear-felled, uprooted and permanently fenced-off from the public.

In its place is an open-cut minesite. Huge lorries, digging machinery and demountable bunkers are on the scene now.

The site for the 10-storey smokestack has been levelled and prepared.
Bike tracks have been sealed off and new ones on the opposite side of Kedron Brook (the old ice rink side) are in place.

A forest of companions were chipped.

Two sizeable former dwellings were demolished adjacent to the East-West Arterial intersection (the western side of Sandgate Road) and barricades have been rolled out across the eastern end of Kalinga Park.

To try to neuter public alarm at the obvious contradictions associated with strip-mining a national War Memorial, the proponents of Airport Link have stepped up the PR campaign.

Late last year householders across the northside of Brisbane were sent a full-colour brochure, festooned with photographs of the Diggers’ Drive entrance sign and declaring all will be well with the world after the Airport Link construction juggernaut has done its darndest.

No matter how long it takes for the quarrying to finish, once Airport Link is finally pronounced open for commuters, the pretty Diggers’ Drive end of Kedron Brook will have been transformed into just another soul-less, landscaped, concrete-sided extension of the eyesore that is “Schulz Canal”; just a glorified stormwater drain beside sterile, monolithic tunnel mouths, in the shadow of monstrous flyovers and noise barriers.

Its avenue of mature trees – mostly tallow wood (Eucalyptus microcorys) and hoop pine (Araucaria cunninghamii) – were planted (by hand) to honour the memory of the Fallen Sons of Kalinga, by actual World War I returned servicemen (not landscaping contractors with bobcats).

What most likely will replace this vista is a forest of saplings and pine bark chips in manicured garden beds.

Airport Link’s intrusion into Kedron Brook’s alluvial floodplain soil (right at the stretch of the waterway that is already subject to saltwater tidal flows) will drastically alter – forever – the water table of Kalinga Park, and there is an elevated likelihood of acid sulphate soil disturbance which could, over time, lead to the demise of all the mature trees that comprise the western segment of Diggers’ Drive.

In short, the integrity of this unique and important War Memorial is under threat… ABOVE: This path wend its way through an avenue of mature hoop pines on Remembrance Day (November 11) 2008 at the eastern end of Diggers’ Drive in Kalinga Park. All these trees were removed within days of this picture being taken. © 2009 Peter Collins.

Every single mature tree at the eastern end of Diggers’ Drive was tattooed at the trunk and summarily executed.

Like the characters for whom they were originally planted, these specimens wore a metal “dog tag” up until they were laid low.

The Airport Link proponents (the Queensland State Government) asks – in its PR literature – for the public to take special notice of the massive, 300-year-old narrow-leafed ironbark (Eucalyptus crebra?) tree just east of the Sandgate Road bridge.

Imagine the changes – and the people – this particular specimen will have witnessed. It is literally ‘the last tree standing’.

No money is being collected. No signatures. If the notion of the loss of an original, hand-made War Memorial concerns you, find out more about what the Airport Link proponents intend doing with Diggers’ Drive.

Ask them what specific plan is in place to reinstate and appropriately acknowledge the debt of gratitude and solemnity that Diggers’ Drive has embodied for more than eight decades.

Will you be satisfied if all Diggers’ Drive warrants is a cheap brass plaque on a park bench near a “no-go area” in the shadow of a flyover and a six-lane tunnel entrance? Diggers’ Drive – all 1,200 metres of it – deserves better.

If you’re still struggling to understand why it matters so much, picture this otherwise non-descript stretch of Kedron Brook being transformed by 83 former soldiers into a “living” monument to the memory of the 182 men and four women (who were nurses) from the Kalinga Division of the Toombul Shire who saw active service between 1914 and 1919.

In constructing an Avenue of Remembrance, these men simultaneously provided a dignified place where the fathers, mothers, siblings, mates and sweethearts of these Sons (and Daughters) of Kalinga could seek solace and mourn.

In the absence of a gravesite to visit – the remains of Australian service personnel killed overseas were not repatriated home during World War I – Diggers’ Drive sufficed as a place of mourning and grieving; enabling Eagle Junction district’s close-knit community to come to terms with its own flesh-and-blood contribution to the ANZAC Legend.

Historian, Dr Michael McKernan, in the January 2009 issue of Memento*, posits that “thousands of Australian families lived through what we now easily call the ‘interwar years’ in grief and loneliness. The war had changed Australia. It was indeed a nation in shock”. The City of Brisbane has ANZAC Square; a place rightly considered sacrosanct and heritage legislation-protected. Diggers’ Drive represents a similar inheritance, but one this State Government is willing to ignore and defile. ABOVE: In the 25 October 1919 edition (page 2) of Brisbane’s “The Daily Mail” newspaper this item appealed for the public’s help to identify a former Eagle Junction-Kalinga District First AIF soldier whose remains recently had been interred in a Pozieres war cemetery. Just another Digger whose name was known unto God. This article was also run in other newspapers across Queensland and interstate. His name remains a mystery still.

Categories: From the archives
Tags: The way it was 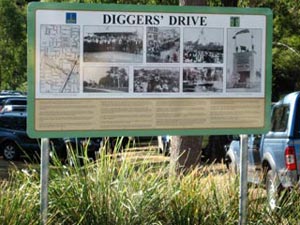 So what is ‘Diggers’ Drive’? THESE are the words that appear on the Diggers’ Drive sign (shown above), located near the entrance to Kalinga Park, at the end of Park Avenue, Eagle Junction. At the urging Read more…